When the baby meets the 5 or 6 months, it’s time to start including new foods into his diet. This incorporation must do of gradual form to be able to observe any allergy that the baby could suffer and identify the food that has produced it. 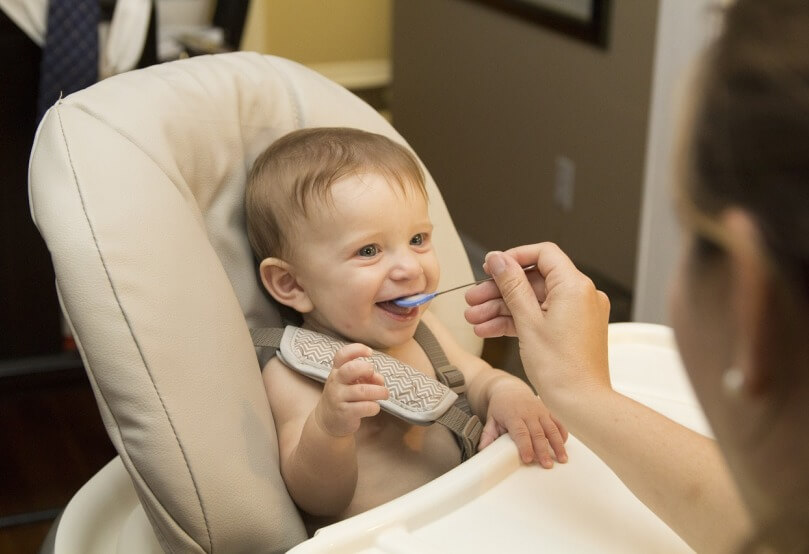 With the first meals the baby experiences new aromas, flavors and textures, so it is quite common to initially reject certain foods. It is for this reason that parents must arm themselves with patience and not to give up trying. We need to start with small amounts and with a vegetable or fruit at the same time; and once we have seen that he tolerates them well, we will start to mix them.

Most babies are prepared to incorporate solids from 5 or 6 months, although each child manages their times. However, there are a number of indications that give notice regarding the baby’s preparation to eat these foods:

How to feed first solid foods?

Start small, with small scoops and talking to the baby during the process, because he probably won’t know what to do at the beginning and he may seem confused, play with food in his mouth or hand, totally reject it or wrinkle his nose as a gesture of disapproval or distrust.

Therefore, it should not frustrate you that his first solid foods end up in your baby’s hair, face, hands or bib. Prevent your child from eating while crying or turning while feeding and remember to increase the portions offered to the baby gradually.

The beginning is not easy or fast, because introducing solids requires high doses of patience. So consider that special and expected moment that you face with so much energy can become exhausting and exhausting due to the lack of habit of your little one. Do not get frustrated!

In this sense, pediatricians advise taking the first meals of babies calmly and affirm that the first semi-solids do not replace breast milk or add missing nutritional elements, there are baby preparations.

Similarly, experts add a tip: the mother should not be anxious or add “condiments” to arouse the child’s appetite. Many mothers fall into the gross error of adding honey, sugar, salt, oil to the porridge.

Of course, avoid that strategy which is not only unhealthy for children of such a young age, but prevents them from having good eating habits. Also stay away from commercial porridge with dyes and additives, because there is nothing like what is made at home. Be patient, the process takes time and dedication!

The time has come: what food do we start with?

As we have said, the idea of incorporating solids or semi-solids initially has a more learning function than nutrition, so it is preferably complementary to the mother’s breast. However, keep in mind that this is the key moment to start creating desired and healthy habits and routines.

At this stage, you can start giving him:

Experts suggest incorporating solid gradually, one at a time, waiting at least two days between food and food to perceive possible allergic reactions to any of them. Diarrhea, vomiting, swelling, rash and difficulty breathing are warning signs.

Needless to say, it is best to consult the pediatrician with what foods to start and when it is wise to add new ones. The doctor will probably advise against foods that are usually allergens such as soybeans, dairy products, eggs, wheat, fish, peanuts and chocolate.